An action covered by our motto “Rubis por uma causa”.

Rubis Energia Portugal has a long history of involvement in community support initiatives. These actions are covered by our motto “Rubis por uma causa” and are part of our Corporate Social Responsibility culture.

Rubis Energia, in collaboration with Rubis Group, recently supported the organisation, Café Joyeux Portugal, whose action and objective are at the heart of the field of social responsibility. Café Joyeux Portugal won this year’s Jury’s Trophy from the Luso-French Chamber of Commerce (CCILF) and Rubis Energia decided to give further support to this initiative.

The project is led by an association called “Associação VilacomVida – a mais valia na diferença“. This association, founded by a group of parents of children with cognitive difficulties, seeks to insert young people with intellectual difficulties into the labour market, acting as a facilitator between the young people and the companies that might hire them.

The Café Joyeux organisation was born in France with the aim of training and employing people with cognitive disorders such as Down’s syndrome or autism. A close relationship with the creators of the French project led to the opening of the first franchise abroad in Portugal. A pilot project was opened to the public in Lisbon, proving that it is possible to be inclusive in the restaurant sector. This café employed more than 20 young people with cognitive disabilities.

Each employee, after being hired, has free access to a two-year training process in which they go through different catering functions. This training leads to a diploma that allows them to get a job in any restaurant or, if they wish, to remain employed in a Café Joyeux.

The concept is financially self-sustaining. The Portuguese expansion model aims to open six new cafés by 2026, which involves the hiring and training of 60 “happy team members”.

The official opening of the first café in Lisbon took place last week in the presence of the French Secretary of State for the Disabled and the President of the Portuguese Republic.

To find out more about Café Joyeux, visit https://www.cafejoyeux.com

Rubis Energia Portugal and Rubis Mécénat have sponsored this Café Joyeux project with a donation of €5,000, which was officially presented at the 2021 gala dinner organised by the CCILF. Not only is this initiative part of the culture of corporate social responsibility established by the Rubis Group, but it also meets our objective to implement societal actions that respond to local needs, contributing to a more inclusive Portuguese society.

This project is an example of how it promotes inclusion, giving real opportunities to young people with disabilities. 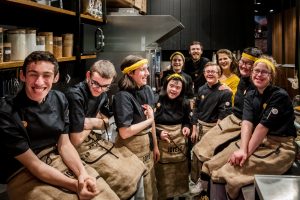